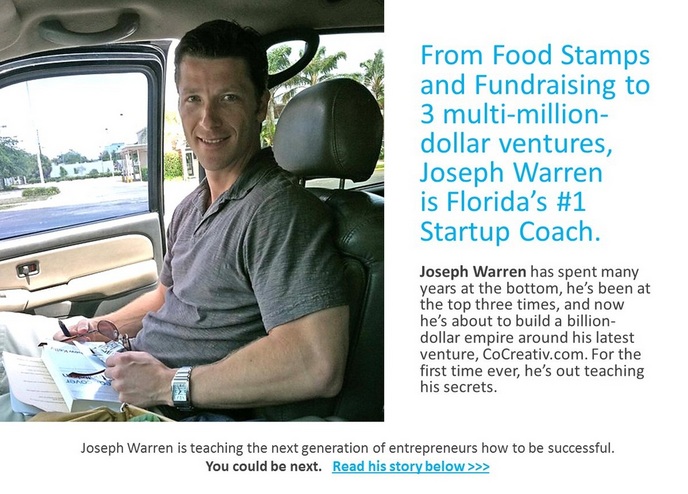 Billed as America's Spiritual Coach, Joseph Warren also has an extensive entrepreneurial background. He previously was a professional speaker for entrepreneurial groups and professional business groups throughout Tampa Bay such as The Pinellas County Business Development Center (BDC), where he shared best practices for launching, sustaining and growing a successful business.

He served on the Board of Advisors for Creative Tampa Bay, was a professional speaker for Hillsborough County Schools, was startup mentor for Gazelle Lab, served on the expert judging panel at Tech Venture Conference 2009, was keynote professional speaker at Pinellas County's TechVenture and TECTalk, hosted by Microsoft®, sponsored by Synovus Bank and coordinated by STAR Technology Enterprise Center.

Joseph Warren completed a 6-month contract position at Ultimate Medical Academy (UMA) where he reported directly to the company's CEO. He was responsible for pioneering a successful career training and webinar program for 10,000 medical students across the U.S. He personally trained the entire Career Services Department who currently use his program to assist their student populations.

He was invited to be final Keynote Presenter and Emcee at University of Tampa's 2015 Southeast Entrepreneurship Conference (SEEC). He is a serial entrepreneur, speaker and former evangelist for entrepreneurship.
.
Raised by a single mother on welfare, Joseph Warren dreaded their weekly trips to the supermarket and hung his head in shame as they paid for the family's groceries with Food Stamps. He made a commitment to himself that when he became a man, his life would be different...he would be happy, healthy and wealthy.

At age 19, Joseph Warren opened a professional fundraising company that specialized in assisting non-profit organizations such as The National Center for Missing & Exploited Children (NCMEC). Within the first 12 months, he grew his venture into a 50-person firm with $2M+ in revenue. Over the next 24 months, he scaled the business into multiple locations and tripled its revenue.

His latest venture CoCreativ, was acquired in 2019 by a another Tampa-based company. CoCreativ managed 11,000sf of shared workspace, private meeting rooms, and private offices. It was the first coworking space in Tampa. Joseph Warren is considered a pioneer in the coworking industry. He is credited for building the local infrastructure required for national brands such as WeWork and others to successfully penetrate the Tampa Bay marketplace.

He is passionate about helping first-time entrepreneurs to become "superstars". With seminars held regularly at The Pinellas County Business Development Center (BDC), he shared his best practices for starting and growing a successful business. He is a successful entrepreneur, speaker and evangelist for entrepreneurship.

Joseph Warren, along with Dr. Alexander Osterwalder and 470 other practicioners, co-authored the groundbreaking and best-selling business book, "Business Model Generation - A Handbook for Visionaries, Game Changers, and Challengers."
Billed as "Florida's #1 Startup Coach", Joseph Warren was a frequent guest lecturer for entrepreneurial groups and professional business groups throughout Tampa Bay. He served on the Board of Advisors for Creative Tampa Bay, was a volunteer speaker for Hillsborough County Schools, served on the expert panel at Tech Venture Conference 2009, was keynote presenter at both Pinellas County's TechVenture and TECTalk, hosted by Microsoft®, sponsored by Synovus Bank and coordinated by Tampa Bay Innovation Center.
.
Joseph Warren was a guest lecturer for collegiate entrepreneurial programs such as USF St. Pete's New Venture Creation Program.  The Sustainable Entrepreneurship & Innovation Alliance at USF St. Petersburg is composed of programs, organizations, students, faculty, community entrepreneurs and supporters committed to building a community of successful, visionary entrepreneurs dedicated to making an impact in our community.

Joseph Warren was a speaker and judge at Startup Weekend Tampa, hosted by Microsoft®. Startup Weekend Tampa is an intense 54 hour event where a community of entrepreneurs, startup enthusiasts, developers, designers, marketing gurus and anyone interested in building a business come together over the course of a weekend to share ideas, form teams, and launch a startup. No Talk, All Action. Launch a Startup in 54 hours.

Joseph Warren was Co-Emcee (with Duane Spires) at the CEO Regional Conference at University of Tampa (Southeast Entrepreneurship Conference (SEEC) 2012) in Tampa, FL.